62 Is The Number For Buying New Cars Lotus Exige S 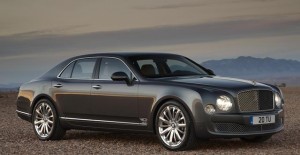 THE EXPRESSION “money is no object” means that cost is no obstacle: you’re willing to pay whatever is required to get what you want. That turn of phrase is very apt when it comes to shopping for a brand new Bentley – especially if you’re after the flagship of the range.

And that’s exactly what the new Mulsanne is – it’s the crème de le crème of the world-famous Cheshire based luxury car maker. So, strangely enough, fuel economy and other running-costs are probably at the bottom of your list of concerns if you’re in the market for a vehicle that requires you to fork out more than the price of an average four bedroom house. No, the Mulsanne isn’t about that side of motoring at all. Instead, it cares deeply about transporting you in the most magnificent style possible, preferably with a chauffeur behind the wheel. It’s a massive motorized status symbol – a message to the world that you‘re immensely successful, but that you also have exquisite taste.

Hung up in a giant art gallery, it’d be a masterpiece because the design of the Mulsanne is a blend of sportiness, coach built elegance and solidity. Echoing the Bentley S -Type of the 1950s, the car has a bold front, dominated by the traditional Bentley matrix grille and prominent, classic round inner headlamps, flanked by two, smaller outboard lamp clusters, all featuring the latest in lighting technology. The lengthy bonnet, short front overhang and long rear overhang help to express a sense of might and movement, reinforced by burly haunches and sharply sculptured lines which flow charmingly from the front wings to the rear. Uniquely designed 20-inch (and optional 21-inch) wheels reinforce the Mulsanne’s commanding, sporting stance. 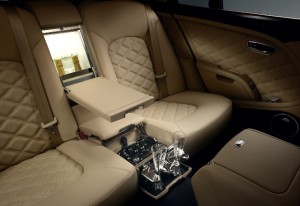 Inside, the aroma of leather and wood envelops you instantly. The scent is wonderful, yet almost overwhelming. And there’s a reason for this: over 170 hours – that’s almost half the entire build process – goes into crafting the interior of the Mulsanne. Each steering wheel can take 15 hours to hand-stitch while stainless steel brightware gleams so perfectly, thanks to an intensive 10 hour finishing process. The wood veneer takes five weeks to turn from a rough root ball into a full set of mirror-matched, fine-polished leaves – and a time-honoured tanning process is even employed for the leather; this is what gives off the rich, worn fragrance that is so evocative of vintage Bentleys. The entire cabin is also encased within a ‘ring of wood’ waist rail with an unbroken panel of wood gracing the Mulsanne’s dashboard. Inverted dial needles within the instrument cluster are reminiscent of early Bentleys, while the whole dashboard and console design is a subtle reminder of the Bentley wings motif. 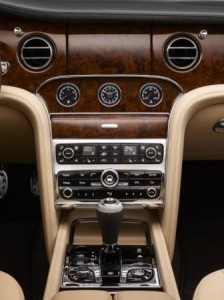 Naturally, sitting in the rear of the Bentley Mulsanne is the best place to comprehend the sheer graft that goes into creating the cabin. Amongst all the glossy wood and lavish leather, you also start to appreciate how the latest in-car technologies have been cleverly and unobtrusively placed within the lush interior. A multimedia system drives satellite navigation, audio/video, personal data, telephone and Bluetooth® connectivity. The upper dashboard houses a multimedia screen, positioned discreetly behind an electrically operated veneered flap, while below sits a chic, leather-lined media player stowage drawer with connectors for iPod, USB and much more. 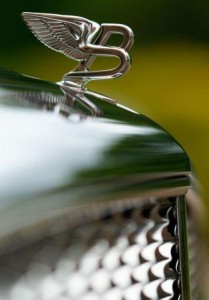 Whether sitting in the back or behind the wheel of the Mulsanne, you cannot ignore the pure punch of energy unleashed from the Bentley’s 6¾-litre V8 engine. It guarantees huge power at low revs and self-possessed performance, while maintaining high levels of finesse at any speed. The powerplant, mated to an eight-speed automatic transmission with steering-wheel mounted paddles, delivers 505 bhp – and vast torque (752 lb ft) is delivered at 1750 rpm. This spectacular pulling power from just above idle and right across the rev range ensures that with a simple tap of the accelerator you’re instantaneously rewarded with that distinctive, sonorous, V8 burble as well as exceptional acceleration. 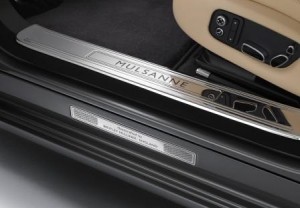 Quite simply, the Mulsanne is as near to motoring perfection as you can get. The only thing that lets it down is a smaller than expected boot but, that aside, very few car manufacturers can offer such a concoction of performance and refinement in a single vehicle. So, if you can afford it – why wouldn’t you want to experience Bentley’s top model? Life’s too short to keep it all in the bank.