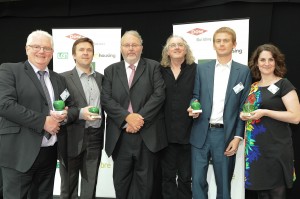 THERE WAS a clear winner – or rather, a pair of winners – for this year’s Midland Group of Motoring Writers Green Apple awards.

Held in association with the internationally recognised Green Organisation, it aims to find the cars that are both good to drive and are leading the charge towards more sustainable motoring.

And the car the judges thought best managed both ideals was the Chevrolet Volt and its identical twin, the Vauxhall Ampera.

The Volt and Ampera are known as range extenders; cars that rely purely on pollution-free electric power for many miles of motoring, before switching to an efficient petrol engine if more distance is needed before the battery can be recharged.

One judge from the Midland Group of Motoring Writers said of the cars: “Brand new technology that takes in the best of both worlds. Gives you the option of joining the electric club without the penalties of not being able to go anywhere.”

Another wrote: “It is clever, it brings something really new to this sector, it is the best of both worlds for those who like the idea of electric motoring but not the restrictions it brings. Genuinely futuristic and all the more appealing because of it.”

The award, and Green Apple trophies in several other categories were presented at a ceremony in the East Wintergarden in Canary Wharf, London. The entries were judged by the 30-strong Midland Group of Motoring Writers (MGMW) who spend their working lives at the wheel of the latest cars and get to assess them in the real world, far away from the laboratories where the official fuel consumption tests are carried out.

The Volkswagen up! was winner of the supermini class, with Ford’s Fiesta as runner-up.

One judge said of the winning VW: “It shows VW at the top of its game, stretching conventional technology to produce a car that drives like a bigger one and finds an amazing amount of space for people, but sips fuel like a petrol miser.”

In the small family car category the Kia Rio took a win over the newly introduced Peugeot 208, with one judge saying of the Kia: “The latest Rio looks good and is great to drive too. The diesel model is also a commendable ‘green’ performer.” 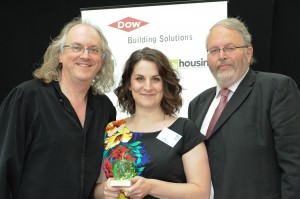 The larger family cars vote went to the Chevrolet and Vauxhall duo that later took overall honours, with the BMW 3 Series in second spot and an honourable mention for last year’s overall champ, the VW Golf 1.6 TDI Bluemotion.

Range Rover’s hugely successful Evoque took top prize in the smaller SUV and 4×4 section, with a judge saying: “The most stylish, trend-setting SUV of all is also one of the most economical. Who says Range Rover can’t do green?” Second spot went to the Skoda Yeti, with the VW Tiguan garnering enough votes for a high placing.

There was no runner-up in the coupe and cabriolet section, with judges divided about many of the entrants. However, one car did stand out this year in the handsome shape of the new Vauxhall Astra GTC. One judge wrote: “Vauxhall has made a real effort to produce a car that’s both good to look at (essential in any coupe) but also economical to run and own.”

Final category was for luxury cars, won this year by the Jaguar XF fitted with the 2.2 litre diesel engine that, as one judge said: “Brings a real luxury feel in a car that costs surprisingly little for what you get, which includes surprising real world economy.” Runner up was the BMW 5 Series, nominated here in 520d guise.